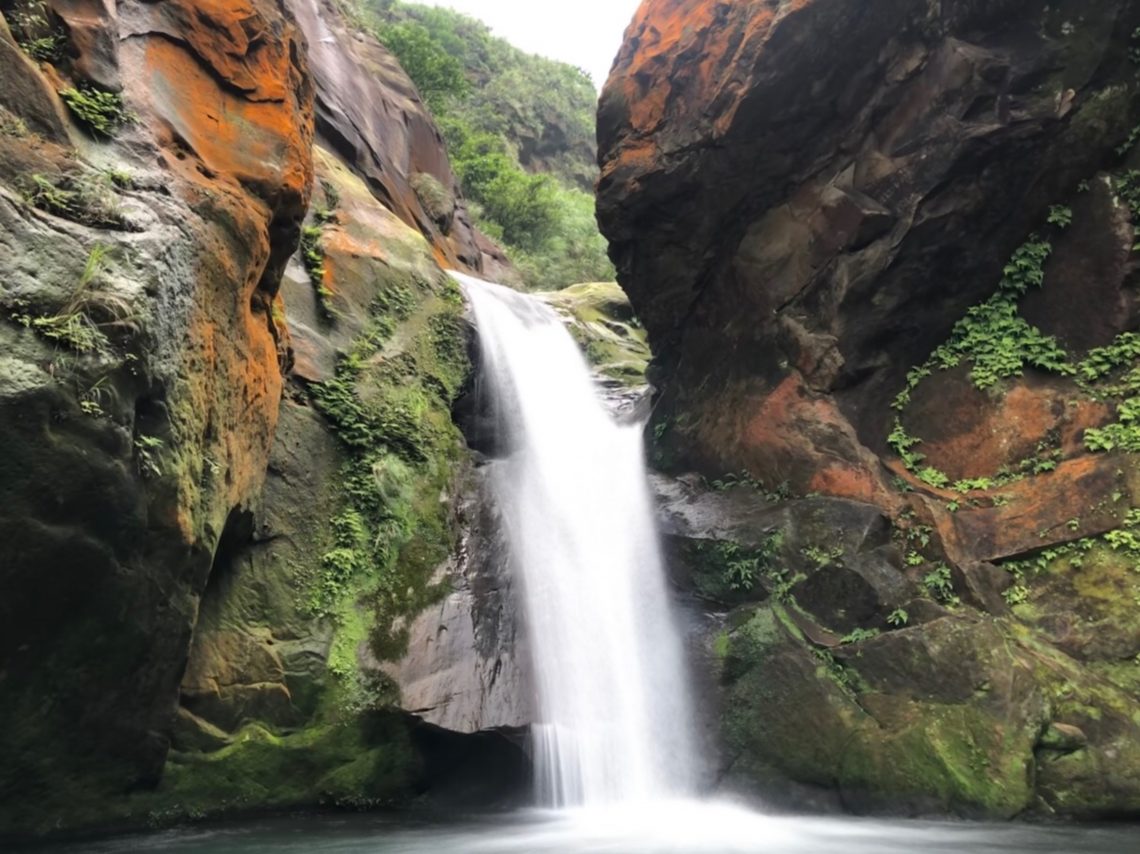 Here comes the summer. Taipei is undoubtedly hot hot hot. If you are thirsty for some nice waterfall spots to cool you off, while being unwilling to go too far away from Taipei, then here is the right article for you. We collect some of the best waterfalls in Taiwan (perhaps not the most famous) that you are able to play water in and around. Most important of all, they are all accessible from Taipei by transportation. So, what are you waiting for? Prepare your swimming stuff and check them out.

Living in Taipei is quite convenient to reach anywhere, especially via MRT. So, speaking of waterfalls that is close to MRT station, or with only small walk from station, then Yuanjue Waterfall must be your favorite. It’s located nearby the Dahu Park MRT station. After exiting No.1, you can search ‘Dagou River Park’(大構溪親水公園). It takes about 15 minutes to reach there.

Then, you can take a delight walk on riverside trail, embracing breeze in summer. At the end of the path, Yuanjue Waterfall will wow you with pure pouring water and green environment surrounded by mountains. Of course, you’ll have the chance to play water with friends.

You may notice many children are catching fish or soaking their feet in the cool water, while their parents are having picnic. Maybe it’s hard to believe there’s a waterfall spot that is so close to Taipei center. Because of its accessibility and clean environment, however, Yuanjue Waterfall is actually popular that drives parents visit there with children. With the approaching of summer, better get up early to avoid crowded people.

Thinking of natural wonders, perhaps you might come up with somewhere really far far away from the urban area. Nonetheless, these spectacular places lie just in New Taipei City, and are accessible by public transportation. Some foreigners may know Shifen Waterfall(十分瀑布) as introduced in many blogs or media.

However, Shifen Waterfall, with great volume of water pouring down, is breathtaking to appreciate, but not suitable for playing water. However, on the same railway line (Pingxi Line平溪線), a neat choice, Wanggu Waterfall, is only one station away from Shifen Waterfall.

Wanggu Station is considered a low-profile paradise for travelers, with pleasant landscape yet less popularity. In our point of view, it’s believed to be the most tranquil waterfall nearby Taipei. Hidden in green mountains, Wanggu Waterfall remains less popular yet must-go for travelers who would like to escape from the city’s hustle. Some local people tend to visit this place in summer to avoid crowds toward Shifen Waterfall.

When you go along the path on mountains, you find yourselves more unruffled among the nature. Once the waterfall appears in sight, perhaps you will be moved by its water flow and beautiful scenes. The water is so pure that attracts every travelers to play water there.

Speaking of water volume, Lingjiao Waterfall is second only to Shifen Waterfall in Pingxi District. However, the water is too deep to play water nearby. Still, as an open-minded traveler, you can take a glance of this majestic masterpiece.

Perhaps some bloggers have well introduced a beautiful place called the Wormhole, located in  Shiding District, New Taipei City. Many water-activity lovers used to go there as well as other waterfalls in Pingxi. However, be noted that the local government just implement law in June to prohibit playing water at the Wormhole and water area around.

We have to say that Pingxi District is really a prominent place that collects several accessible waterfalls. So, same here, you can find another playful waterfall in this area, Huiyao Waterfal. It’s actually situated between the Wanggu Station(望古站) and Lingjiao Station(嶺腳站) of Pingxi Railway Line. If you just complete a mind-blowing trip at Wanggu Waterfall, maybe resuming your aquatic adventure at Huiyao Waterfall will also be a neat choice as well.

Huiyao, literally as ‘gary kiln,’ this word indicates that this area used to feature coal mining industry. And along Huiyao riverside is the coal-carrying roads and Qinghe Mine(慶和礦坑) that prove the prosperous industrial history. The Huiyao Waterfall, as Wanggu Waterfall, is a relaxing place without discovery.

Even Taiwanese people are not familiar with ‘Huiyao’ this name. Although it looks like a small-scale pool with some water trickling down, it remains a calm place that helps travelers exclude noises made by the crowd and vehicles. Water is totally pure, and you can even see stones at the bottom of the pool. However, when stepping along the paths toward Huiyao Waterfall, be careful of grassy and moist environment that might make you stumble.

Small Hui Lu Old Trail is located in Ruifang District(瑞芳區), New Taipei City, with only 30-minute drive from Taipei center.Once you first hear about ‘Hui Lu Old Trail’, you might connect this place to Hualien one. Yes, in Hualien’s Taroko National Park, there’s a Hui Lu Old Trail as well.

However, in Ruifang here, you can take a glimpse of similar magnificent landscape, so, people name it ‘Small Hui Lu Old Trail.’ Hiking on this trail, scenes of ocean, streams, waterfalls, and mountains can be captured thoroughly at one time. It’s truly a valuable spot to have fun in summer. And please refer to waterfalls that cool you off in summer as follow.

This place is famous for river tracing, and quite adjacent to Taipei City. Therefore, Dagui Waterfall is totally a smart option for adventurous travelers on the go. Although Dagui Waterfall is not a large-scale one, with huge water volume, it features super clean water, calm environment, and mountain view. You get several ways to reach there. Either through mountain paths(Small Hui Lu Old Trail as we mention) or river is not so complicated to achieve. While hiking on mountains, you can savor picturesque scenery and bath in phytoncide from nature. And if you are more a water lover, maybe tracing to the bottom of the river is another choice. But always remember to get yourselves well prepared(river tracing equipment, etc.) and be careful of the weather, water environment, and other conditions.

In Chinese, ‘xiao’(小)means ‘small,’ while ‘da’(大)means ‘big.’ So, as you may guess, Xiaogui Waterfall shows fewer volume of water flow than that of Dagui Waterfall. However, it boasts an outstanding view that blends various water colors, rock cliffs, mountains, green plants, etc. into a paradise-like picture.

The water there is extremely clear without any pollution. You can find many shrimps alive under the water. It’s said in certain Taiwanese blogs that there are more waterfalls following Xiaogui Waterfall. So, if you still have some energy after soaking in cool water at Xiaogui Waterfall, then why not keep yourselves active and curious and mark your new spots on the journey.

Well, after having these Taiwan waterfall spots in mind, you won’t be worried about where to have fun with water. Even you are in Taipei, there still get plenty of places for you to cool off. Chill out now in summer.