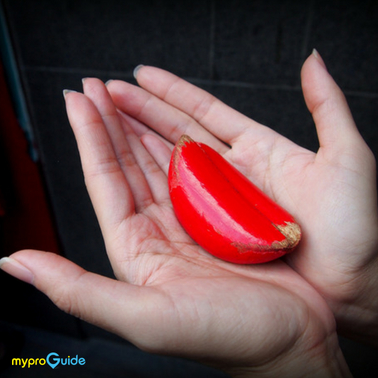 If you have been to or are now in Taiwan, and you ask a local to recommend you some must-gos, chances you are urged to visit a local temple. If you complied to it, (or you just ended up visiting a temple for some other reason,) you might have seen locals in midst of a personal ritual, casting red wooden blocks in the air, letting them land on the ground with a big “clink!”, and checking out the results.

Those crescent-shaped red blocks are most commonly called moon blocks, but they also come in the names divination blocks or Jiaobei. The mini ritual of casting the moon blocks itself is called Bwa Bwei in Taiwanese.

What are moon blocks for?

They are used by Taoist as a form of divination, or talking to the gods. People most often cast them to get straightforward yes-or-no answers, such as “Will I meet my Prince Charming this year?”(yes, it can be as random as that.) But they are also used on more solemn occasions, for example asking if the soul of a passed away relative has come to the funeral site. They are not only performed in temples, but also in homes. If there are no moon blocks present, coins can be used instead. Personally, We even know a friend who will Bwa Bwei in his dorm room, seeking guidance from a so-called “God of the Dorm” he believes exists.

How do you cast moon blocks?

Plenty pairs of moon blocks are provided at pretty much any temple. First of all, find yourself one of those. They are crescent shape of woods, plastic, or bamboo, and they come in a pair. Circle them on the top of the urn one or three times (can not be even number). Stand in front of the deity and briefly introduce yourself. People typically tell the deity their name, age, birthday, and address. Now you can ask a yes-or-no question, and toss them to the ground. To be really strict to the ritual, put your left foot and hand in the front to show respect. Watch how they land.

What do they mean?

There are two sides to the block, one rounded side and one flat side. If the blocks both landed rounded-side up, it’s an “angry answer”. It means “no” or that the deity is angry. If the blocks both landed flat-side up, it’s a “laughing answer”. But it doesn’t mean a “yes”. It might symbols that the deity finds the question funny, the answer is obvious, or that the referent should know the answer.

When casted a laughing answer, most parents will teach their children to cast again anyway. If the blocks landed one side up and one side down, then it’s a “divine answer”. This means “yes”! There is another rare occasion when one of the blocks might stand erect on the floor and falls on neither side. This symbols the deity does not understand your question, you should present it more clearly and cast again.

Anything else I need to know?

If you’ll like to draw a fortune stick, you also need to cast moon blocks afterward to confirm if this fortune stick is the one for you. Even if the questions can be pretty random and mundane, Taiwanese people treat this process rather seriously. Please do not interrupt them in midst of the ritual. There are so much going on in a temple it’s hard to explain all of them in a single article. Casting moon blocks is only one of them. If you’ll like to visit a temple, make sure to have someone show you the wondrous customs people obey and explain to you the architecture and historical significance of the temple! 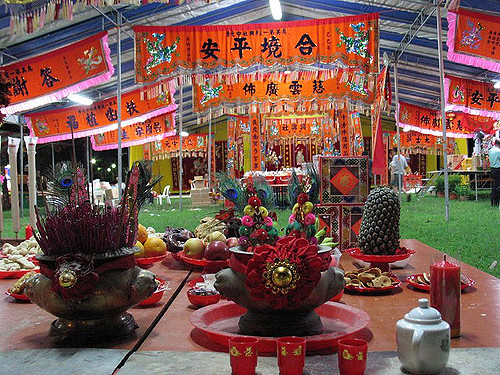 Beware! The Dos and Don'ts of The Hungry Ghost Festival in Taiwan