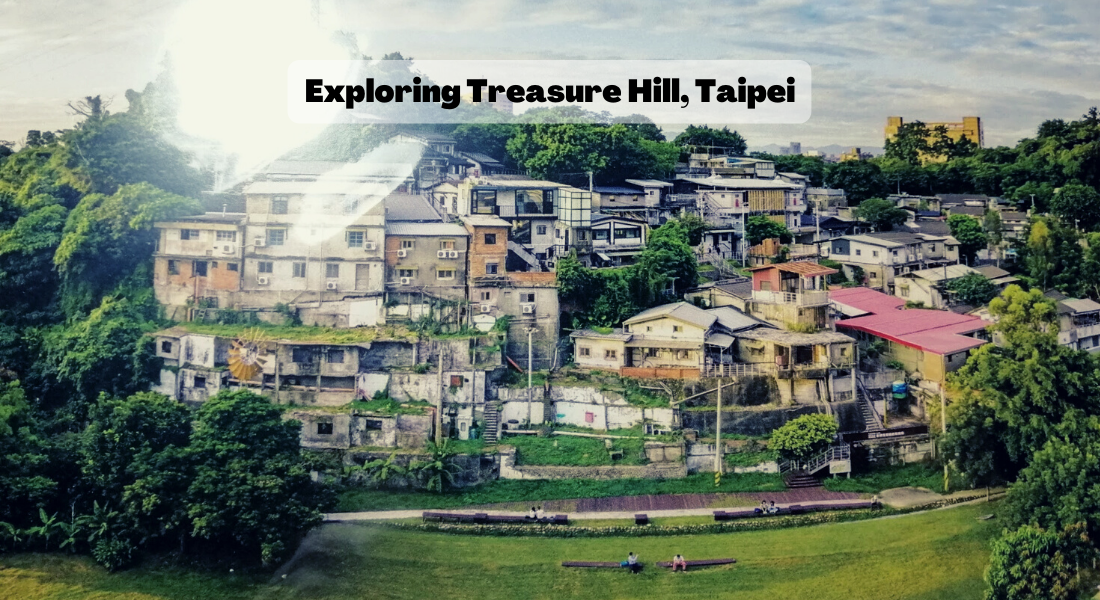 Explore the Gongguan Area and Treasure Hill in Taipei, the so-called “Urban Playground of Taipei” with MyProGuide!

During 1930s, Treasure Hill was used as a military base during the Japanese colonization and was filled with ammunition depots and bunkers. After the Kuomintang (KMT) took over Taiwan, they had continued to use the construction as a military fort, yet it was at that time that some illegal buildings started to pop up. Later on, the number of illegal buildings in the area almost reached 200 and was about to be demolished by the government. However, with its riverside location and with its bit of forest messiness, it was regarded as unique- a place that has distinct characteristics. After the protest against the government, some artists gathered around Treasure Hill, and dwelled in the area. It has then become, according New York Times, an attraction as charming as Taipei 101.

Things to see at Treasure Hills

Wandering around the small alleys of Treasure Hill, you can see creative graffiti on the walls and the quiet corners where the veterans used to sit on. You can also see some interesting slogans about striking back at mainland China. Treasure Hills has been one of the most iconic spots for art lovers. It is where local artists take elements from what they have and blend those with the modern artistic reflections of the current generation. Contemporary art being exhibited in this village is a very appealing concept. Some also describe it as a lively open-air art museum. Marked as a historical landmark in the 1930s, with all the artsy vibes leaving traces of the area’s rich history, it is a very pleasing experience to immerse yourself in the passages of Treasure Hill.

Highlights During the Night: Night Views Over the River, Open Bars, and Live Performances

The area near the Xindian River is a riverbank where the public can walk, do sports, and ride bikes- while at the same time, having the best view of the riverside. The highlight is said to be during the night when, you will be able to see the shining night view over the city along the river. A few minutes away from the riverside is an open bar area offering good food and drinks. During the night, on the weekends, it is often packed with youngsters looking for a fun night out in Taipei.

About a 10 minute-walk away from Treasure Hill, the Museum of Drinking Water is located in the Gongguan area of Zhongzheng District. First established in 1908, it has then been designated to be a Grade-3 historic site in 1997. After undergoing several restorations and after having spent a huge amount of funds for these restorations, it is now open to the public. Since 2007, it has been officially included as one of the attractions in the Taipei Water Park, together with other water-related facilities that includes the Gongguan Visitor Information Center, Nursery in Water Source Site, Ecology Hiking Trail, Pipe Sculpture Area, Water Distribution Material Exhibition Area, Water Resource Educational Hall, Gongguan Purification Plant, Aqua Friendly Experiencing Area, Historical Water Metering Room Plaza and Raw Water Pumping Station. Not only does the Museum of Drinking Water woo families for fun water activities, but it also attracts young people to relish in its photogenic Baroque architecture and cozy vibe.

The Gongguan area is one of the most popular destinations for both Taiwanese locals and foreigners alike. The capital city of Taiwan, Taipei City, has much more to offer than its iconic landmark, Taipei 101. Sign up for MyProGuide’s Customized Tour Guide Service now to see the most authentic and awesome Taipei attractions 👉🏼 https://bit.ly/2LHAVMm