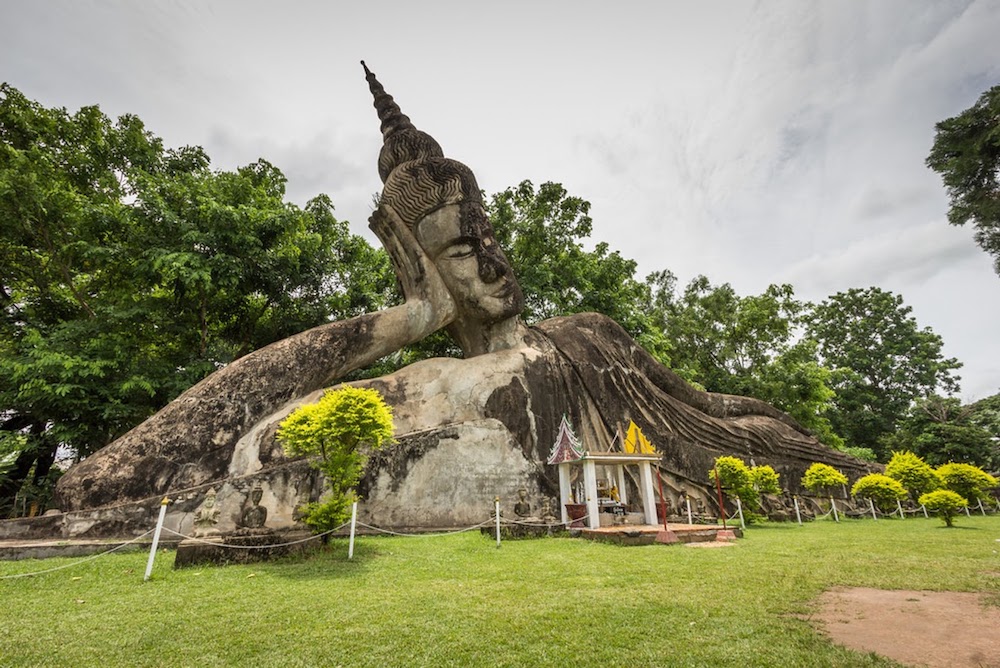 Laos is a quiet and thinly populated country, best appreciated for its small-scale rural places and true wilderness. Laos is a landlocked country steeped in nature, food, history, and Buddhism. It used to be a popular destination for partying but, since the wild tubing days have been curtailed, it’s turned into a more relaxed, outdoor-oriented country. If you only had one day to travel Laos, you would want to spend it in Vientiane, Laos’ biggest city and capital. Meandering along the banks of the Mekong, Vientiane is surely Southeast Asia’s most languid capital. The wide streets are bordered by tamarind trees and the narrow alleys conceal French villas, Chinese shophouses, and glittering wats. The city brews a heady mix of street vendors, saffron-clad monks, fine Gallic cuisine, boutique hotels, and a healthy vibe that sees visitors slinking off for spa treatments and turning their time to yoga and cycling. It may not have Luang Prabang’s looks, but Vientiane has a certain charm all of its own. Looking to experience the best of Laos in one day? Here is a list of things for you to explore for a one day trip in Vientiane:

one of the best-known landmarks in Vientiane and was designed to resemble the Arc de Triomphe in Paris. It is however also carved with symbols of Hindu Gods and has an additional five towers which resemble traditional Laotian buildings making this something of an East meets West kind of attraction. The monument is part of the wider Patuxai Park and this is a great place to come if you want to go for a serene walk at sunset. You can also take in the views across Vientiane from the top of the Patuxai Victory Monument either by climbing a set of stairs to the viewing platform or using an elevator.

More than 200 statues filled with cryptic symbols give this parking spot an aura of horror vacui fantasy. Located in a peaceful corner near the Mekong River, the Buddha Park just outside of Vientiane, Laos, has become a bizarre-yet-enjoyable attraction. Locals refer to the Buddha Park as Xieng Khuan, which means ‘Spirit City.’ Forget the typical Buddha images seen in temples across Southeast Asia; the Buddha Park near Vientiane contains over 200 sometimes-menacing statues portraying Buddhist and Hindu lore. A 390-foot-long reclining Buddha is the crown jewel of the collection. The religious-themed statues are spread over a peaceful lawn and certainly capture the attention of all visitors. A three-story dome allows visitors to enter through the gaping mouth of a demon and then climb staircases through the dark, dusty structure from ‘Hell’ to ‘Earth’ and eventually emerging at ‘Heaven’ on top of the dome for a spectacular view.

The Pha That Luang or “Great Stupa” is the most important Buddhist monument in Laos. The large golden stupa in Vientiane is believed to enshrine a breast bone of the Buddha. The pagoda also known as That Luang is officially named Pha Chedi Lokajulamani, which translates to “World Precious Sacred Stupa”. The large grounds surrounding the golden stupa contain several other Buddhist structures. In front of that, That Luang is a statue of King Setthathirat, King of the Lan Xang Kingdom and founder of the monument. The Pha That Luang is the scene of the country’s most important Buddhist festival, the Boun That Luang, held during the full moon of the 12th lunar month. Thousands of people flock to the grounds for three days of Buddhist ceremonies and celebrations to pay respect to the golden stupa and to give alms to hundreds of monks. Buddhist devotees walk around the That Luang three times holding incense sticks to pay their respect.

The Haw Phra Kaew or Ho Phra Keo is one of Laos’ most highly venerated temples, now turned into a museum. The temple derives its name from the Emerald Buddha, Thailand’s most highly revered Buddha image which was enshrined in the temple for over 200 years. The Haw Phra Kaew was built in 1565 by King Setthathirath when he moved the capital of the Lan Xang Kingdom to Vientiane. It was constructed to be the temple for the Laos Royals and to enshrine the Emerald Buddha which stayed here until 1779 when it was taken to Thailand. Since then the image is enshrined in the Wat Phra Kaew temple on the grounds of the Grand Palace in Bangkok. Like all religious and cultural sights in Laos, modest attire is required. No bare shoulders or thighs.

The most frequently used grounds in Vientiane are those of Wat Si Muang, the site of the lák méuang (city pillar), which is considered the home of the guardian spirit of Vientiane. The large sǐm (ordination hall; destroyed in 1828 and rebuilt in 1915) was constructed around the lák méuang and consists of two halls. The large entry hall features a copy of the Pha Kaeo (Emerald Buddha), and a much smaller, rather melted-looking seated stone Buddha that allegedly survived the 1828 inferno. Locals believe it has the power to grant wishes or answer troubling questions, and the practice is to lift it off the pillow three times while mentally phrasing a question or request. If your request is granted, then you are supposed to return later with an offering of bananas, green coconuts, flowers, incense, and candles (usually two of each). he beautiful temple is a must-visit for its lavishly adorned interiors. The carved gold pillars, brightly painted ceiling and the golden statues of Buddha will leave you speechless. Make a wish in this holy shrine, and who knows you might return to fulfill your promise!

What began as a private museum, established by the family that runs Kanchana Boutique, has subsequently become something of a Lao cultural center. The emphasis at this leafy compound, spread across several local-style wooden buildings, is on textiles. There is a house filled with looms and antique Lao textiles representing several ethnic groups, and at other stops, you can see various stages of weaving and dyeing in action.

Vientiane Night Market is located in Chao Anuvong Park, which is near to the Mekong River and the lively Quai Fa Ngum, in Vientiane City Centre in Laos. The night market opens from 18:00 to 22:00 every night of the year, although if it is raining heavily (June to August is the wettest period) it’s not worth going because few stallholders choose to open and few people go. The food stalls near the market are very cheap and sell Laotian food making this a popular place for local people to come and eat in the evening. The sidewalk is full of plastic tables and chairs where diners eat and drink. You can easily combine a visit to Vientiane Night Market with the opportunity to try some authentic Laos food at very cheap prices. Eating roadside on the Quai Fa Ngum is also an atmospheric experience and if you fancy a drink after there are lots of bars nearby.

Book a customized tour with MyProGuide to experience the best of Laos in one day! 👉🏼 www.myproguide.com 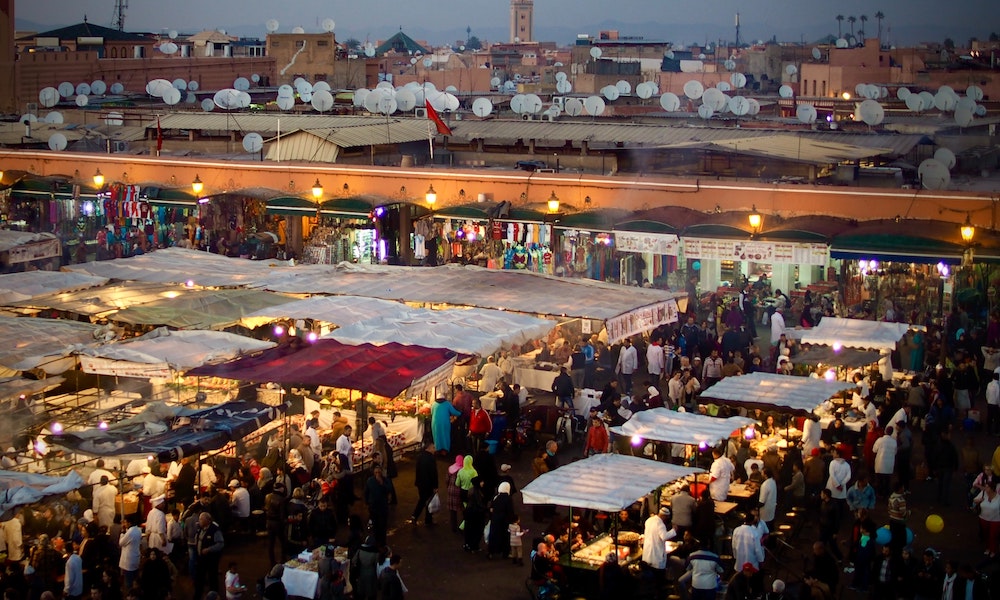 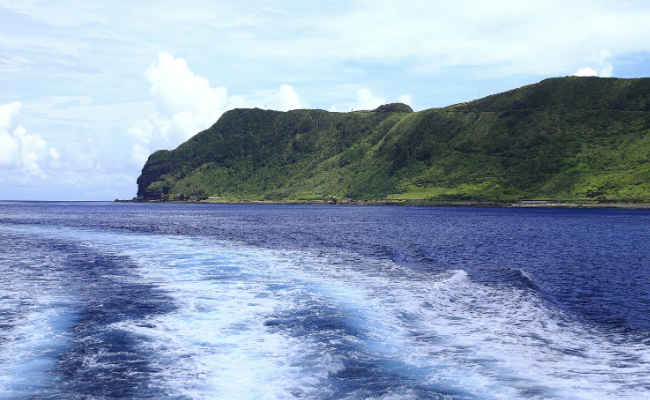